There are between 100 and 200 known Acer species, in one of the two genera making up the Aceraceae family. Only thirteen of these species are indigenous to North America, including ten that are native to Canada.

The Acer species are trees, all with strong, tough wood that is highly prized for furniture, flooring, and woodwork. They are deciduous, bearing simple palmately lobed or composite pennate leaves, without stipules. 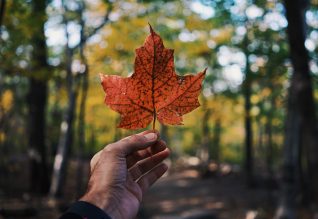 Maple flowers are regular, with five sepals and five petals, although the corolla is sometimes devoid of petals. The inflorescences take the form of hanging or upright clusters. The fruits are winged double or paired samaras (keys). Their seeds contain very little in the way of reserves, being devoid of albumin. 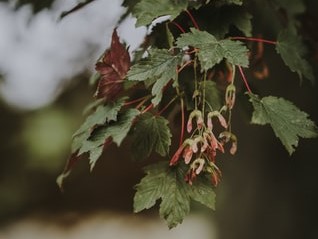 Maple trees are giants, growing to a height of 25 to 30 m on average, but occasionally reaching 40 m. Their average diameter is between 60 and 90 cm, but some may measure 150 cm.

Their growth is very slow, at 1.1 mm at their circumference per year. Maple trees are therefore protected in Quebec and no one can cut them without the consent of the authorities, even if the maple grove is on private land.

Since February 15, 1965, the maple leaf has graced the centre of the Canadian flag; it is Canada’s best-known visual symbol, at home and abroad.

The maple tree (genus Acer) was officially proclaimed the national tree of Canada on April 25, 1996.

When autumn comes, the countryside is ablaze with a thousand flames. In temperate zones, deciduous trees change colour in autumn, and no one can deny that the sugar maple and the red maple don the most splendid hues of all. Their leaves glow in a spectrum of warm colours, ranging from pale yellow through brilliant scarlet to deepest purple.

It should be noted that the morphology of the maple varies considerably, depending on the habitat of the individual tree.

Once upon a time, the Natives…

Legends from the Native Americans