Although maple syrup is a pure and natural ingredient, its production requires a certain amount of knowledge and skills, often acquired from generation to generation. For those who love quality, the details and the equipment used will be more elaborate. This will ask the maple producer to take care of them meticulously and to control them.

The evaporator is an enormous stainless steel vat in which the maple sap undergoes a condensation process, resulting in a series of reactions that partially determine the colour and flavour of the future maple syrup. Maple sap is boiled for many hours, until enough of the water has evaporated. It takes 40 litres of maple sap to make 1 litre of syrup. The maple syrup is ready when it acquires the specified density of 66 degrees to 67 degrees Brix.

The Brix value corresponds to the percentage of sucrose by weight. For example, 66 Brix degrees is equivalent to 66 g of sucrose per 100 g of solution. When this figure is reached, we have genuine maple syrup!

Other reactions also take place in the evaporator, the main one being the caramelization of certain sugars, which gives the syrup its colour. The more the sugars caramelise, the darker the syrup.

Caramelization must be controlled or avoided, because it gives a caramel taste. This would mask the subtle, authentic flavour of maple syrup. To avoid that, the maple syrup must cook fast on a high, intense and regular fire.

The thermometer is fixed at the end of the boiler. It’s calibrated depending of the barometric pressure of the air depending of the boiling point of the water at the moment. It can be calibrated more than once a day depending of this important weather factor. It will also always be regularly compared to the results of another instrument called the hydrometer (density indicator of the sap). The electronic thermometer will control the pouring of the maple syrup at the coming out from the boiler valves. These valves will automatically open when the maple syrup is cooked enough (66 Brix degrees). This will help avoiding over cooking of maple syrup by controlling standards of the quality.

The osmosis unit utilises the phenomenon of reverse osmosis, by which water can be separated from sugar. Primarily a technique for sea-water desalination, reverse osmosis has been adapted for use in concentrating maple sap. Although not all maple syrup producers use this technique, it does save firewood and time. 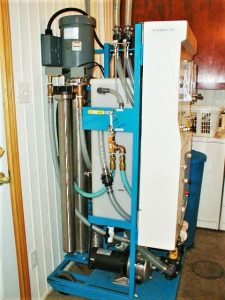 The method works by exerting mechanical pressure on the sap (2% to 3% sugar), forcing a certain volume of pure water to pass through a semi-permeable membrane. This membrane blocks the passage of larger molecules, such as sugar and other dissolved components. At the cylinder outflow, there are two phases: the distilled water thus extracted and the maple sap, concentrated so that its sugar and mineral content may be as high as 8%. The concentrated maple sap is then heated in the evaporator.

It is used to filter the maple syrup at the exit of the boiler. It is done before storing it in stainless steel barrels to preserve it in the best conditions. The filtering will occur by passing the maple syrup into several series of special papers all stacked together and fixed to a metal structure.  This process will simply be used to take out all sediments from the maple syrup and will bring the maple syrup is transparency and brilliance by avoiding the deposit of sediments on the bottom of the bottles once the product is bottled.

Important notice: This filtering process has no impact on the color and grades of the maple syrup.

From tapping to harvest